On the 23rd April, 8 students were lucky enough to grasp the opportunity to perform in a ‘Move It’ project, held by Pro Excel.

On the 23rd April, 8 students were lucky enough to grasp the opportunity to perform in a ‘Move It’ project, held by Pro Excel. The overall event was to perform at Twickenham both before and at half time of the London Wasps and the Bath Rugby Team at the St. Georges Day game.

Prior to the event there was a four day training course (18th-21st April) held in Brentwood and Chelmsford. They were both extremely intense and really fun; a great way to make new friends for the pupils.

Overall there were just under 700 performers from all over the UK, 65 of the performers were representing Essex.

At the St. Georges Day game the Stewards group were cheered onto the pitch by 80,000 screaming, eager spectators. Before the match the performers performed 2 dances to well-known music, and at half time they performed 2 more dances with Heather small, one of the songs being ‘Proud’ which is the Stewards theme song for the school’s video. Matt Walton in Year 10, the only male representative of Stewards School in the dance troupe said “It was one of the most fun and memorable experiences of my life, I wish it wasn’t over. However, I look forward to the next big opportunity”. 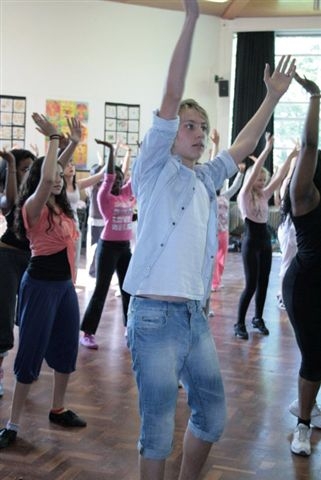