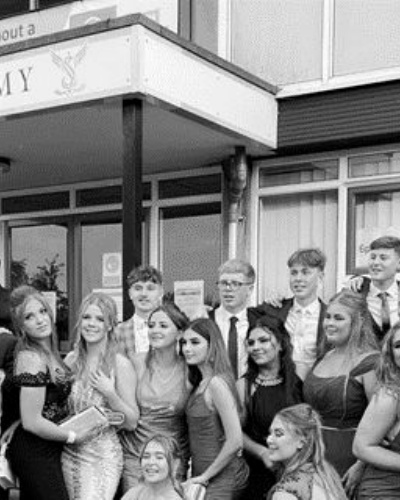 Stewards Academy was delighted to finally host our Leavers Celebration event for the Class of 2021 on 20th July.

After many scenarios, dates and plans due to the changing government guidance we were lucky to book a marquee and have it on the Stewards site. A team of staff had previously formed a ‘prom’ committee and planning was well underway despite the change in date and venue.

Excitement started to build as the marquee company erected the marquee on Monday 19th as sports day was underway. As members of the prom committee decorated the marquee on the Tuesday staff and pupils were under strict instructions of ‘no photos’ and ‘no talking about what you see to year 11s!’ The vision and décor was to be a wonderful surprise.

After the heatwave and calmness of the day, the rain and breeze started to build up and we all kept our fingers crossed that it would pass over!

As the time neared for our guests to arrive, our guest DJ started the music, food and drinks were delivered, the chocolate fountain and popcorn carts started up and the lights were switched on…the hard work had paid off.

A sea of glitz and glamour came towards the entrance and were wowed by what they saw. Although the rain appeared briefly it did nothing to dampen our spirits or that of our guests who were incredibly appreciative of the staff efforts.

Di da Vighi, Assistant Headteacher, said: “After the disruption to our pupils over the last 17 months it was absolutely amazing to be able to bring this event together. At a number of points we didn’t think it was likely with the changing guidance, but the determination and commitment of our staff has shone through. There are many staff that were key to making this event happen but a particular thanks to Mrs Tant, Miss Martin, Ms Long and Miss Stylianou for without their research, vision and creation the celebration would not have been what it was! It was a wonderful occasion and a memorable end to the academic year.”