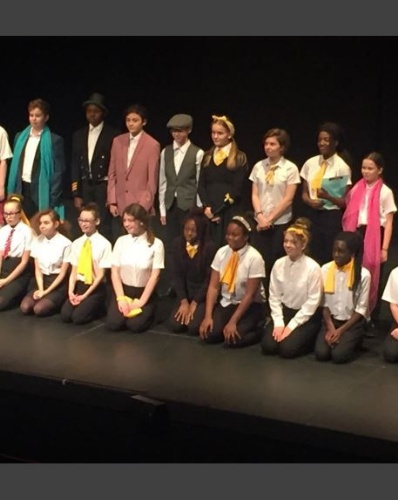 Stewards Academy was very proud to present two separate performances of Hamlet and The Taming of the Shrew at The Shakespeare Schools Festival at The Harlow Playhouse last week, continuing a commitment to youth theatre which it has been a part of for over 12 years. The Shakespeare Schools Foundation is an award winning cultural education charity that gives young people the confidence to succeed in life by taking part in the world's largest youth drama festival. Every year at professional theatres across the UK pupils have the opportunity to immerse themselves in transformational performances which enhances their confidence and resilience.

The production of Hamlet - which was directed jointly by Mrs da Vighi, Miss Tovey and Student Director Charlotte Easby - was described by the organiser as a 'slick and intelligent performance with beautiful imagery from a committed cast.' The individual performance of year 11 pupil Seven Hassan as Hamlet was extraordinary for the insight he managed to convey of a mind spiralling into madness. The intensity of the piece was such that the whole audience was enthralled by the command of the stage by the actors with their 'bodies and voices.'

The performance of The Taming of the Shrew by a slightly younger cast, directed by Ms Lindo and assisted by Mr Strachan, was another 'original interpretation with strong unique characters.' Bryony Witt-Davies was a convincing Katherina for one so young, and the strength of the cast was evident from the explosive start of the piece, which transported us into the modern world as it's setting.

The whole experience of the Festival for the 36 pupils involved was memorable and something they will remember forever as a unique experience. For some of the year 11 pupils it was their third experience of being part of the Festival and they were clearly emotional to think that this would be their last. Their gratitude to Mrs da Vighi, who has championed the SSF for so many years, was self evident as they presented her with flowers. Headteacher Helen Ginger, who watched the performances, said 'I was blown away by our Shakespeare Schools productions - truly amazing! A huge thank you to our cast and producers for thoroughly entertaining us all.'