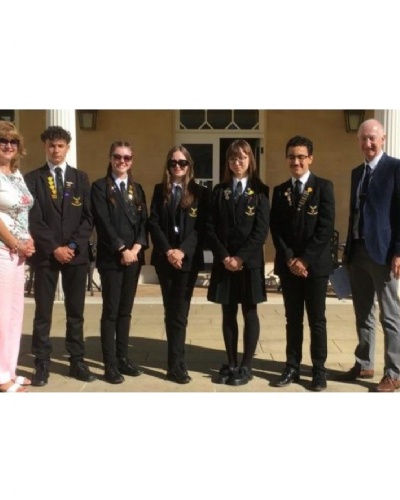 Stewards Academy pupils were yet again the stars of the show at the annual PTI Subject Enrichment Residential at Downing College, University of Cambridge. Five year 10 pupils made up the panel for around 200 teachers of Art, English, Geography and Music. The pupils - Mia Christie, Grace Pudney, Matylda Szczerba, Seven Hassan and Kai Jordan - all gave a two minute presentation on their specific subject area.

The audience responded warmly to their words, and with some delight at the candour of the pupils. The pupil panel were then open to questions from the teachers - who were in awe of their confident and articulate responses. The pupils gave advice on the teaching methodologies they found most engaging and productive, and were as one when speaking about the inspirational teachers at Stewards who had played such a big part in their lives. The pupils used humour with intelligence and honesty to put their points across, and the audience were visibly disappointed when the session ended. Afterwards the pupils were overwhelmed with PTI staff and delegates congratulating them - and wishing they were the pupils in their Art, English, Geography and Music lessons!

Stewards Academy has a long-standing, mutually advantageous relationship with the PTI, and has provided pupils for such conferences for many years. Former Deputy Headteacher Marie Erwood, who accompanied the pupils with Gary Cooper, the Careers Advisor, said ‘I have had the privilege of listening to many such pupil panels in my career, but without a doubt this group of year ten pupils has been able to showcase why Stewards Academy can touch pupils’ lives and make a difference. I am so proud of them. To present to an audience of two hundred teachers would daunt most educationalists - but these pupils raised their sights, stepped up to the bar, and spoke with a passion about education which will long remain with their audience.’