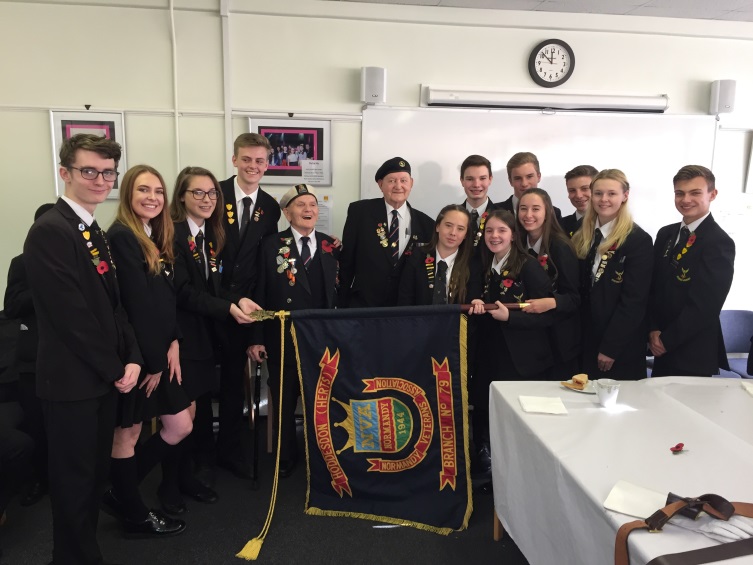 Stewards Academy held a very special whole school Remembrance Ceremony on Fri 10th November. Guests of honour were Normandy veterans 96 year old Harry and 92 year old Richard who both have a longstanding relationship with Stewards. In 2014, as a result of a personal friendship between Mrs Ellis and members of the Hoddesdon branch of the Normandy War Veterans Association, Stewards was honoured to be invited to accompany the veterans to France, to commemorate the D-Day landings in 1944.

On that historic 70 year anniversary, Mrs Erwood, Mrs Ellis and Mrs Archer accompanied four year nine pupils, Becky Dodd, Izzy Dorkin, Charlie Dowers and Stanley Saunders, on a never to be forgotten trip of a lifetime. Bonds were forged and memories were made which are simply unforgettable.

In the past year we have sadly lost several of those wonderful men, whose bravery and positivity were simply humbling. Therefore we were determined to mark Remembrance 2017 in typical Stewards style. An invitation was made to all pupils to invite along any family members who wanted to come. Many responded! Pupils who belong to organisations such as guides, scouts, air, sea and army cadets, or the fire service, were allowed to wear their uniforms to school. They formed a guard of honour for visitors from the local community.

During the ceremony Head Girl Courtney Blackburn read ‘In Flanders Fields.’ Head Boy Ethan Baldry said the Kohima Prayer and Deputy Head Boy Max Leijs said The Exhortation.  The Last Post and Reveille were played and a specially chosen group of year 7 pupils dropped hundreds of poppies from the balcony. Over 1200 members of the Stewards community stood respectfully in absolute silence. The ceremony ended with the National Anthem. It was a deeply poignant moment, and tears were shed by many, as brave Harry and Richard stood to attention. After the National Anthem the pupils spontaneously burst into applause for our dear veterans.

Organiser Mrs Erwood said: ‘Occasions such as this show the outside world what Stewards is all about. People sometimes say that young people today ‘don’t have respect for their elders.’ This has never been the case at Stewards. Our young people are hugely proud of our veterans and they understand the real meaning of Remembrance. Year 11 helped to organise the whole event with me, and they were so proud of the whole ceremony. Every visitor left Stewards with a visual memory of a cloud of red poppies being lifted skyward by the wind. The legacy of Remembrance will always be at the heart of Stewards Academy.’