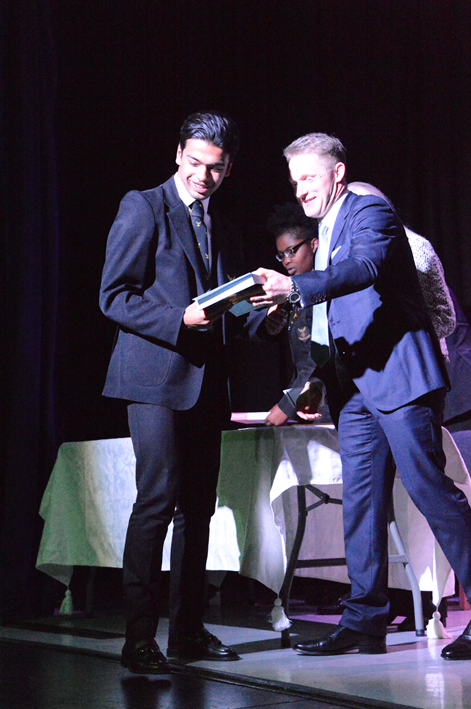 Stewards celebrated the annual Presentation Evening with extra poignancy this year as it was Ms Murthar's last such event before her retirement in the summer. In her speech Ms Murthar looked back over her twenty eight years as Headteacher of Stewards and spoke with huge pride of what has been achieved over that period. She spoke of Stewards being 'at the heart of the community' and how proud she was of the school's 'remarkably inclusive culture.'

Prizes were awarded to pupils for a range of achievements, from their contribution to school life through to their own personal achievements, including their exam success. Guest speaker this year was Jonny Hewlett, a former Stewards pupil whose family has a longstanding relationship with the school. His father Gordon was a school governor for more than forty years. In his speech, Jonny reminisced about the first Presentation Evening he ever attended at Stewards in March 1985. He still had the programme for the evening! He told the pupils that he had his own 'magnificent seven' principles for achieving success. They are:

4. Taking responsibility for yourself and others

7. Having role models And his speech also paid tribute to the impact which Ms Murthar and Mrs Orwin had made at Stewards as his very own role models, 'two of the greatest leaders that any school could ever hope to have.'

In total 140 pupils received prizes on the evening and the audience was treated to performances by Ashleigh Jolley, Hardson Palmer, Josie Jacobs and Hannah Furness.

The last words of the evening from Ms Murthar, before she received a well deserved standing ovation from a packed hall of pupils, parents, staff, Governors and members of the local community, were that:

'Stewards will always be here for you. We have created a wonderful school - and that takes time. Truly great schools don't suddenly exist. You grow great teachers first, you have the right support staff around you and they in turn grow a truly great school. We value respect, honesty and kindness. We look out for one another. As the Ofsted Inspector said: we take pride in one another's achievements.'

Please click below for Ms Murthar's speech in it's entirety.