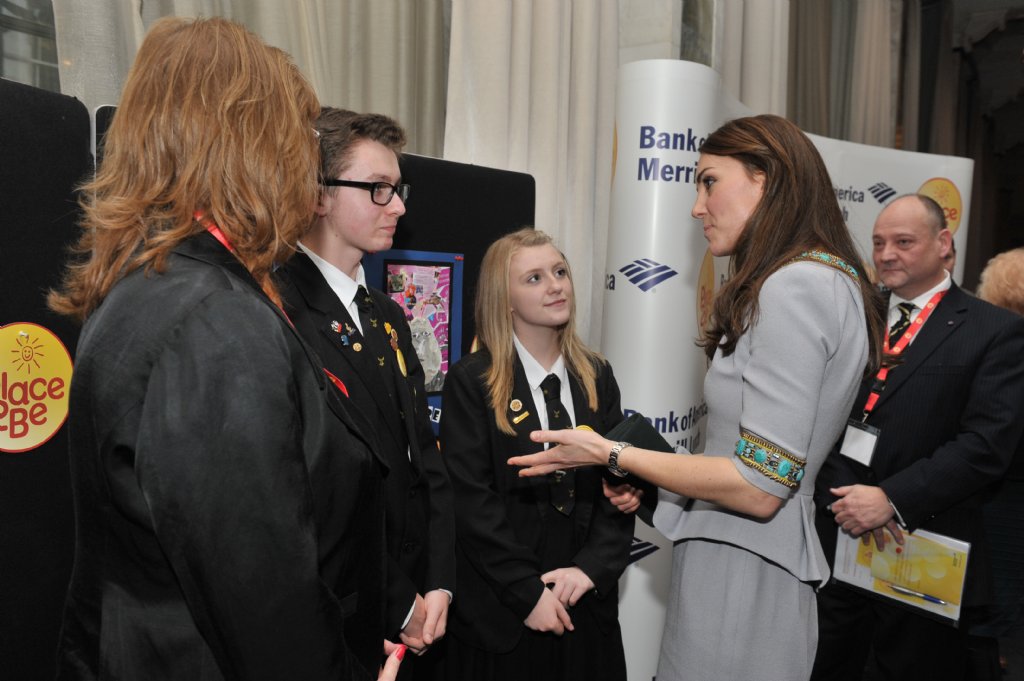 Stewards Academy was thrilled to accept the honour of being the only secondary school invited to present at the prestigious biennial Headteachers' Conference in London for Place2Be, a children's mental health charity.

HRH The Duchess of Cambridge is the Patron of this charity and her attendance at the Conference was eagerly anticipated by one and all.

Place2Be has been an integral part of the support network available to pupils at Stewards for several years. It has run under the guidance of School Project Manager Sara Loveday.

Deputy Headteacher Mrs Erwood, Inclusion Manager Keith Naunton and Sara Loveday attended the conference, accompanied by two pupils, Lucie and Harry, who had the privilege of addressing the delegates at the conference.

Lucie and Harry spoke with enormous confidence and sincerity about the importance of having such a service available to pupils in secondary schools. HRH The Duchess of Cambridge listened to their speeches attentively.

The Stewards party was allowed to greet The Duchess on her arrival and Lucie and Harry were given pride of place in the front row. During the afternoon break, the two pupils and their Deputy Headteacher were presented to The Duchess, who had herself already made a very powerful and moving speech about the importance of prioritising children's mental health issues.

Both Lucie and Harry and Mrs Erwood were later interviewed by ITV for the evening news. With forty years’ experience of teaching in Harlow, the Deputy Headteacher spoke of how important it is to be mindful of the pressures which we place on children today:

“We must ensure that we look to their mental wellbeing as much as their physical wellbeing, as they are the parents of tomorrow, and organisations such as Place2Be can play a vital role in this process.”

Catherine Roche, CEO of Place2Be said: “Stewards Academy is doing excellent work to promote positive mental health and ensure that young people get the support they need at the earliest possible stage, and we were delighted to welcome them to our Headteacher Conference. We hope all schools across Harlow and beyond will follow suit and give pupils’ wellbeing the attention it deserves.”