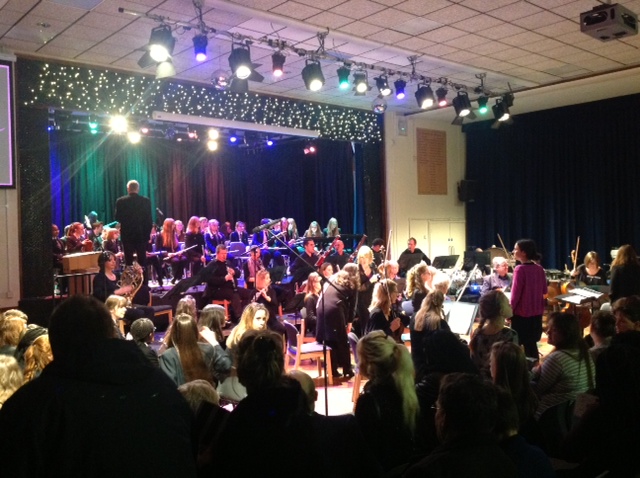 Stewards Academy played host to two spectacular concerts featuring City of London Sinfonia, one of the country’s leading professional orchestras, on 12 February 2015. The concerts were part of the ‘First Time Live - Youth' project led by Orchestras Live, in partnership with Arts Council England, Royal Opera House Bridge, Essex Music Education Hub and Essex County Council.  An afternoon concert performed for over two-hundred pupils from seven Harlow primary schools was followed by an evening concert for the local community. Bothconcerts culminated in the performance of an original composition produced exclusively for these performances, involving one-hundred pupils from Stewards, Burnt Mill, St. Mark’s, Passmores and Mark Hall, who performed alongside City of London Sinfonia. The concerts were the result of workshops at Harlow’s five secondary schools and ten of its primary schools delivered by Orchestras Live, City of London Sinfonia and composer John K Miles as part of the ‘First Time Live – Youth’ project.

This project is a unique and innovative orchestral touring initiative that brings orchestral music into the lives of young people aged 10 to 14 across England. It is targeted at young people who have had little or no access to a live orchestral concert experience and who live in local authority areas in the bottom 20% for levels of arts engagement.  ‘First Time Live – Youth’ began in 2013 in Hull, Scunthorpe, Harlow and Luton, reaching a further six locations over the following year. Almost 12,000 young people from 100 schools have been involved, many experiencing a live orchestral concert for the first time. The current legacy project in Harlow is reaching some 400 young people.  Commenting on Twitter, Royal Opera House Bridge said: “a great venue, talented musicians and confident Young Producers made First Time Live an awesome experience”, with City of London Sinfonia adding that the concert was “a fantastic occasion” and Essex Music Hub, “an inspiring evening.”  A group of Young Producers from Stewards Academy were deeply involved in producing the concerts; selecting the programme, undertaking technical design and stage management, creating marketing materials and presenting the evening. Emily Oliver, a Young Producer, reflecting on the experience, said: ’all of the schools have enjoyed working collaboratively to achieve our shared goal. We hope that our enthusiasm and passion for music is able to pass down to the next generation of budding musicians, and that our audiences feel inspired to continue a relationship with classical and orchestral music; through listening, playing an instrument or composing some of their own music’.  Find out more about the ‘First Time Live project’ at www.firsttimelive.org.uk.