Stewards Academy pulled out all the stops to commemorate Remembrance Day, with the whole Stewards community coming together as one. About 1400 people stood in silence in the bright November sunshine to remember the sacrifices of so many in the past 100 years. About 50 pupils wore the uniforms of the Air, Sea and Army Cadets, as well as St John Ambulance Brigade, the Guides and the Scout movement. Representatives of the Armed forces, the Police and the Fire service attended, along with Reverend Barry Johnson. Parents, governors and specially invited guests also attended. But the guests of honour yet again this year, as in 2011, were the members of the Normandy Veterans Association. Their longstanding relationship with Stewards was strengthened this year when four pupils and three members of staff accompanied the veterans to Normandy to commemorate the 70th anniversary of the D Day landings.

The assembled body listened silently to the Last Post, played by Chris Waters and Rob Plested, and to the Exhortation and the Kohima Prayer, recited by Edward Thomas and Bayley Summerfield. Then a specially selected group of year 7 pupils scattered hundreds of poppies over the heads of everyone gathered in the school quad. And a gust of wind suddenly lifted the poppies up into the air in a hugely symbolic moment. The veterans were deeply moved by the occasion, and presented two wreaths to the school. They all spoke of the warmth of the welcome they are always given at Stewards, and the respect and affection they were shown by all the pupils who queued up to meet them and listen to their amazing stories. Organiser Marie Erwood said ' These wonderful veterans are very dear to us at Stewards. It was a huge privilege to accompany them to Normandy in June and having them here with us to mark such a significant anniversary is such a joy. None of us will ever forget today, and every single child at Stewards showed due respect for a poignant ceremony.' 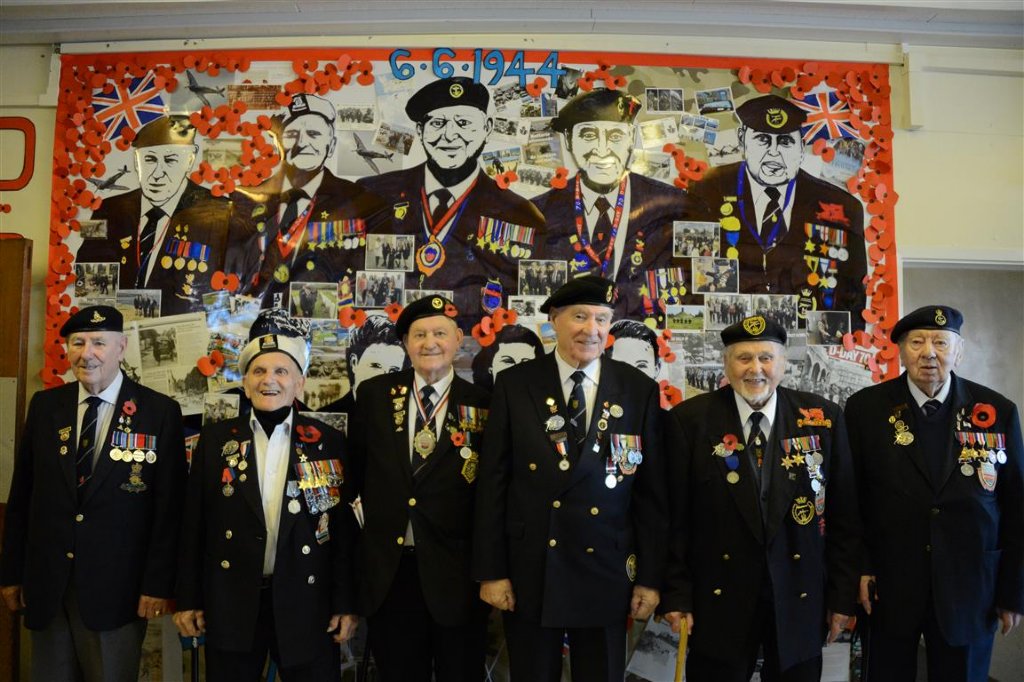 The Veterans next to a Display of remembrance in the school.  For more photos of this event please see our Gallery photos.