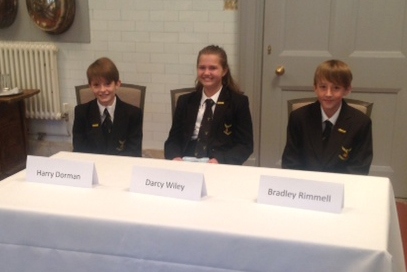 Stewards Academy was thrilled to have been asked to bring along year 7 pupils to speak at a conference at the Ickworth Hotel organised by The Prince's Teaching Institute. The occasion was the first time that the prestigious national organisation has organised a conference aimed at primary head teachers and teachers. Three year 7 pupils from Stewards Academy, Darcy Wylie, Harry Dorman and Bradley Rimell were chosen by Assistant Headteacher Marie Erwood to take on this daunting task. All three pupils took centre stage at the conference and were the first speakers of the day, and they answered a series of questions about their primary school experiences.

They were full of ideas and suggestions for the attentive crowd, and spoke articulately and with confidence. At the end of the session the organisers complimented the children on how impressive they had been and what an impact their words had on the audience. Marie Erwood said 'I was so proud of these pupils who represented Stewards so well. I have no doubt that their previous junior schools, Henry Moore, Katherine's and St James would have been equally proud to hear them speak.'